Draft obituary for the Masked Finfoot?

A maximum of 300 Masked Finfoots in ten countries There was a time when Masked Finfoots (Heliopais personate) could be found in many of the lowlands of north-east India, across Bangladesh and into South-East Asia. These strange-looking birds feed on fish and invertebrates in the rivers and along riverbanks and then climb up into trees to build their nests and hatch their chicks. Over the last century or more, drainage and forest clearance has removed breeding habitat and caused a massive decline in the species’ distribution. The Masked Finfoot was uplisted from Vulnerable to Endangered in 2009 (Birdlife International / IUCN), when the population estimate dropped to 1000 individuals.

There are only three species of finfoot – the other two are the African Finfoot (Podica senegalensis) and the South American Sungrebe (Heliornis fulica). These two species are categorised as being of ‘least concern’ but the same might have been said of the Masked Finfoot a few decades ago, based on its previous extensive distribution. Writing in Forktail, the journal of The Oriental Bird Club, Sayam Chowdhury and colleagues have brought together historic and current information about the status and population size of the Masked Finfoot, in each of ten countries. Although the quality of data available to them is variable, they conclude that the species does not breed in Indonesia, Malaysia, Singapore and Thailand. For six other countries the minimum and maximum number of individuals are now estimated as India (0/4), Laos (4/30), Myanmar (12/40), Cambodia (12/64) and Bangladesh (80/160). Bringing these numbers together, the global population is assessed as being between 108 and 304 individuals. The paper includes important regional details for each country, thereby highlighting the most important sites and potential target areas for conservation actions.

The authors of the paper are uniquely qualified to present a review of the status of the Masked Finfoot and to comment upon the conservation challenges that the species faces. The new population estimate provides evidence that should be sufficient for Masked Finfoots to be uplisted to Critically Endangered, using BirdLife/IUCN criteria, especially as data from the Sundarbans (Bangladesh) suggests that there has been a 36% decline in nesting pairs in just seven years (Chowdhury 2017).

The Masked Finfoot depends on low-lying, undisturbed areas of forested wetlands, especially river channels with formerly little or no human activity. Such wetlands in Myanmar, Laos and Cambodia are rapidly being converted for agriculture and commercial fisheries, or encroached upon by people such as fishermen and hunters. Hydroelectric dams, built in the headwaters of rivers that still hold birds, are also a threat.

In the protected lowland forest wetlands of Cambodia and Myanmar, where suitable habitat still exists, threats come from illegal activities, such as the clearance of river-edge forests, hunting and egg-collection. The conservation of masked finfoots in these countries will depend upon political decisions and local community initiatives. The authors of the paper suggest that increased survey work in Myanmar might reveal new populations. Figure 2 Masked Finfoot depend on forested wetlands, especially river channels, where they feed on fish and invertebrates © Sayam Chowdhury

The Sundarbans of Bangladesh

The Sundarbans mangrove forests cover a vast delta in southern Bangladesh, famed for its Bengal tigers and Ganges River dolphins. Assessing the importance of the Sundarbans for masked finfoots, using the population estimates in the paper, it would appear that this area holds a minimum of 50% and possibly up to 75% of the remaining world population. This makes it an obvious target for protection measures, especially as there are already well-established national parks in the region.

Sadly, even in protected areas, hunting and collection of eggs and chicks, illegal clearance of forests and the use of poisons during fishing operations threaten Masked Finfoots. The extensive use of mono-filament fishing nets is probably the biggest problem, causing major disturbance and involving significant bycatch of birds, including finfoots. During these netting operations, fishermen may be alerted to the presence of finfoot nests, which they then return to at night, to take eggs and incubating birds. The authors suggest that it may be necessary to create (and police) no-access zones in areas where Masked Finfoots are known to breed, if the species is to be saved from extinction. As with work to save the Spoon-billed Sandpiper (Saving the Spoon-billed Sandpiper, 2019), resources will need to be found to fund large-scale education and outreach campaigns focused upon the global importance of Masked Finfoot and forested wetland habitats, and targeted at local communities. As suggested twenty years before this paper was published, these should emphasise the effects of opportunistic hunting, egg collection and the problems of accidental bycatch (BirdLife International 2001).

A major overarching issue that threatens conservation work in the Sundarbans is sea-level rise. There is already evidence that salt-water encroachment is restricting the area in which Masked Finfoots can feed, with the breeding range contracting towards the northern limit of the mangroves. This is a situation that is not going to improve. If Bangladesh birds are all ultimately threatened by climate chaos, then perhaps there needs to be more focus on populations in Cambodia, Laos and Myanmar? 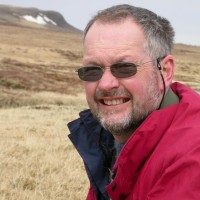 Graham Appleton is a freelance writer and blogger. He is best known for his WaderTales blog series but writes about a wide range of bird species. Before retiring, he was the Director of Communications of the British Trust for Ornithology. Graham is the Honorary Treasurer of BOU.